Seamounts are underwater mountains that rise hundreds to over thousands of meters from the seafloor, and are generally understood to be biodiversity hotspots that host important deep-sea reef and fish communities. In the Galapagos, seamounts remain largely unexplored as these habitats are below depths for safe human diving. Thus, VideoRay's ROVs, which can reach depths up to 1000m, are invaluable research tools for seamount research. They not only record high resolution video surveys, but also allow for sample taking with various manipulator arm attachments available. 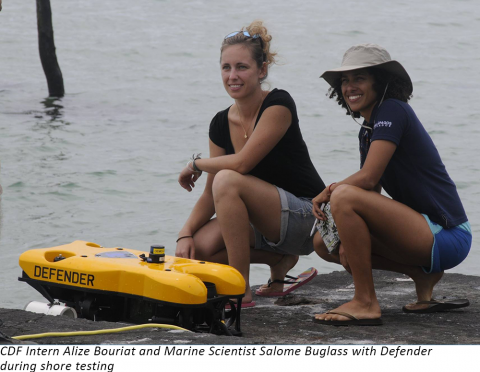 VideoRay arrived in early November with a large team and two Mission Specialist (MSS) vehicles, the Defender, and a late-stage prototype Pro 5. A total of five days were spent at sea collecting data in the form of video transects using a stereo-video system developed by the Fish Ecology Lab of Curtin University, Australia, led by professor Euan Harvey. The stereo-video system was integrated into the ROVs prior to the mission to ensure success. The modularity of VideoRay's MSS systems allowed for seamless integration and operation of the stereo-video system. 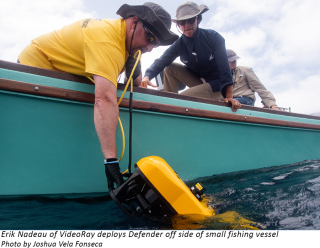 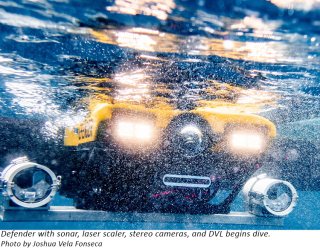 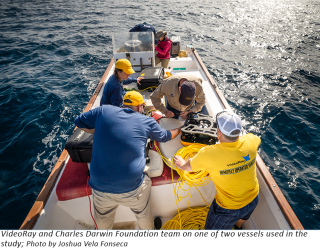 Both ROVs models were used on the study at different times. The Defender's larger and more powerful design allowed it to carry a Doppler Velocity Log (DVL) which made the automatic navigation of straight transects easier. The Pro 5 was more portable and a bit easier to deploy. Both vehicles were easily modified to carry the stereo camera. 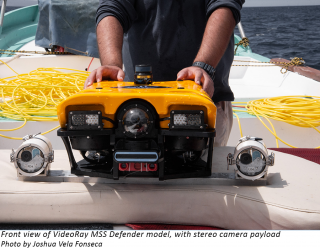 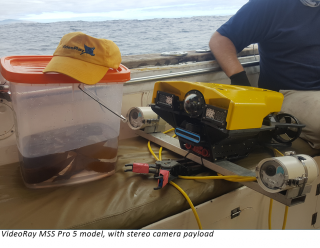 ​The ROV expeditions were very successful, but did overcome a few challenges such as complying with the strict rules and regulations of this world-famous UNESCO heritage site that is the Galapagos National Park's Marine Reserve, and troubleshooting the usual things that go wrong when conducting a pioneer study using new technology to explore uncharted deep-sea habitats in the open ocean.

For Salome and the team, the months of hard preparatory work quickly paid off as they eagerly watched the live-streamed, video footage from the deep: mesophotic soft coral reefs (between 40-60m deep) and deep-sea glass sponge gardens (between 150-180m deep) teeming with interesting fish species. The highlight was the discovery of a macro-algae dominated landscape that is likely a kelp forest on the summits of a seamount. This finding is possibly ground-breaking, as nothing like this has been found before. Salome, together with the other scientists of the Charles Darwin Foundation and the Galapagos National Park, are now currently hard at work studying the macro-algae seaweeds and identifying a whole host of species and their communities. 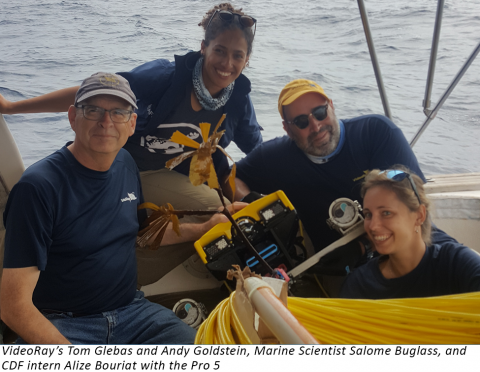 The team's next challenge is to analyse all the video transects of this field campaign to characterize the different seamount habitats found. This information will be essential information for local decision makers and the management sector of the Galapagos Marine reserves at it will provide scientific baseline data about these little understood ecosystems.

An ongoing blog for the mission can be found on National Geographic's OpenExplorer site. The Charles Darwin Foundation also posted their own blog about the research here. Para español, haga clic aquí.

We would like express our gratitude and appreciation for the generous grant awarded by the Lindblad Expeditions National Geographic Fund, without which this project would not have possible. As an interesting side note, Lindblad deploy a fleet of VideoRay Pro 4s on their ships (though not currently in the Galapagos.) 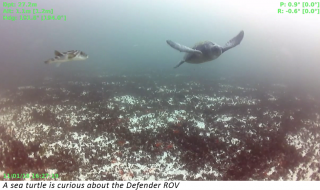 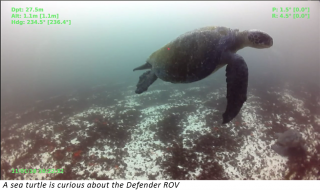 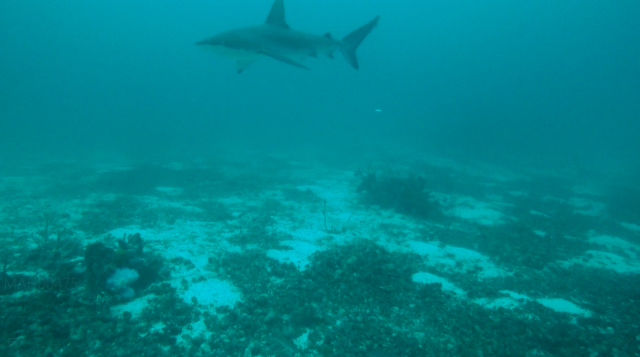 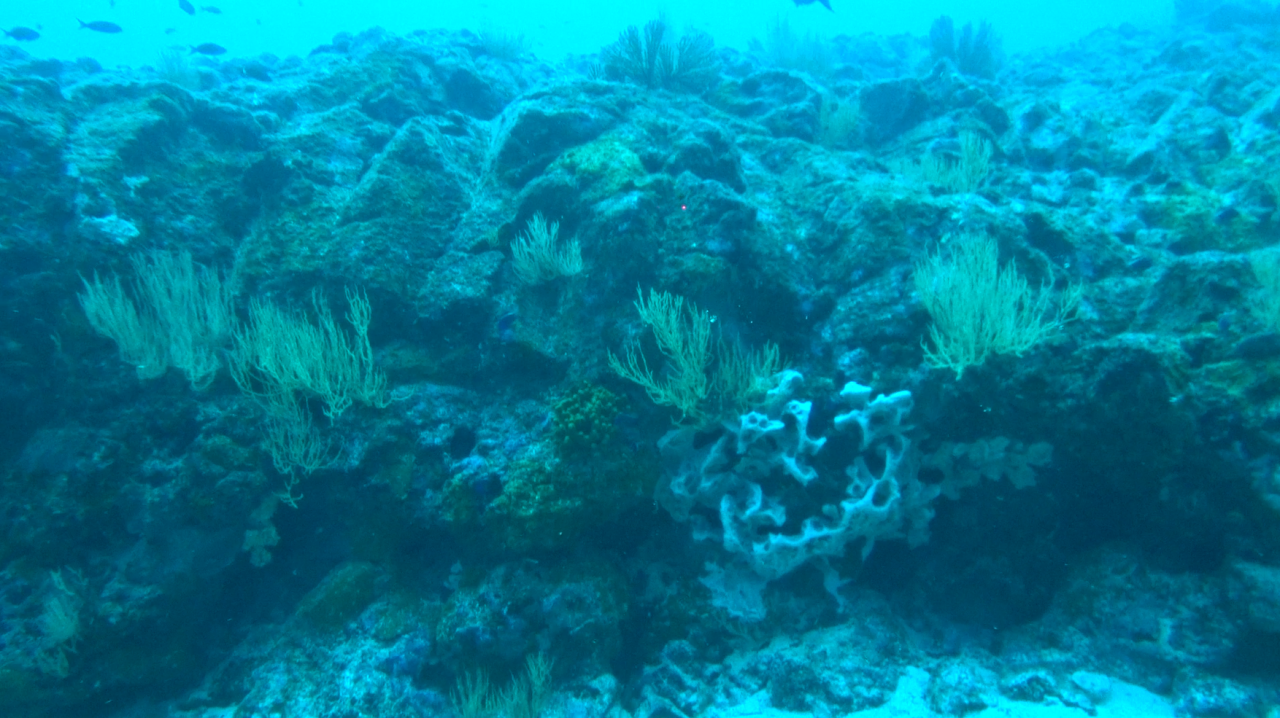 After a stony sandy flat floor we arrived on a wall where a big white sponge and others small encrusting sponges, 2 different black corals species (one up to the wall and the other one in mid-wall) and fishes could be found 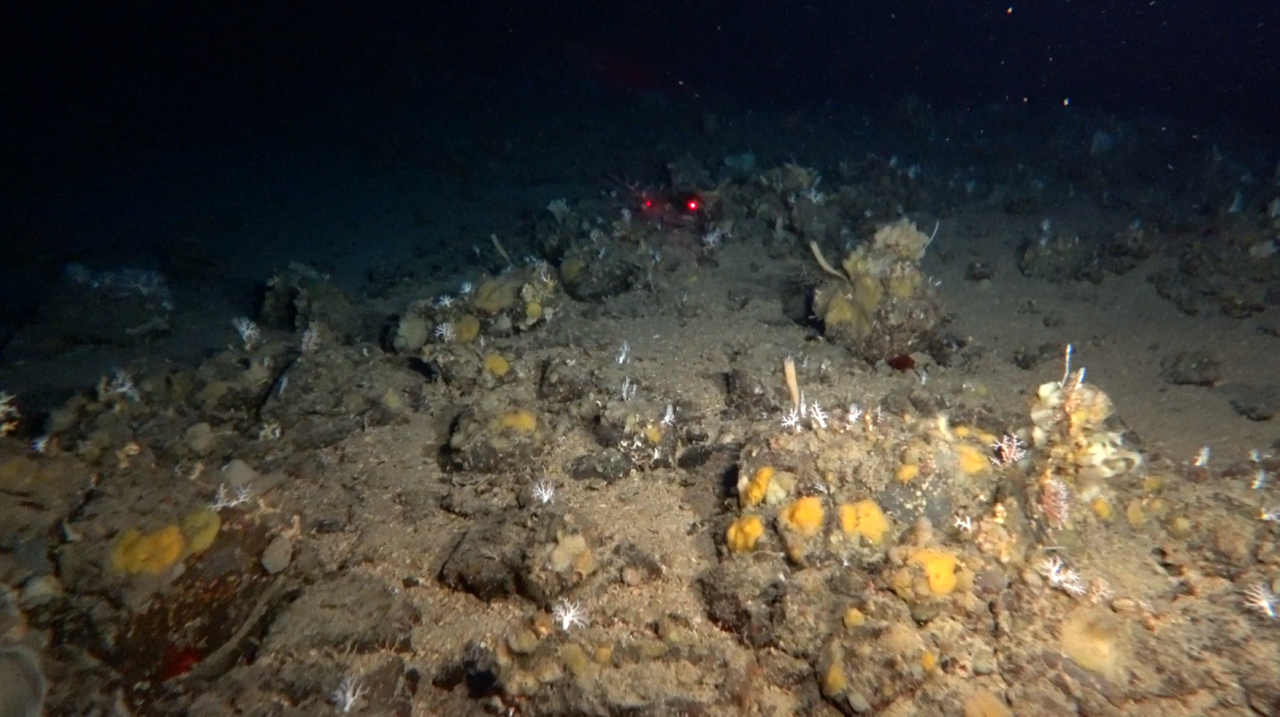 Sponges forest/garden: encrusting sponges in yellow and tubular sponges in beige/orange, and again some hydrocoralians 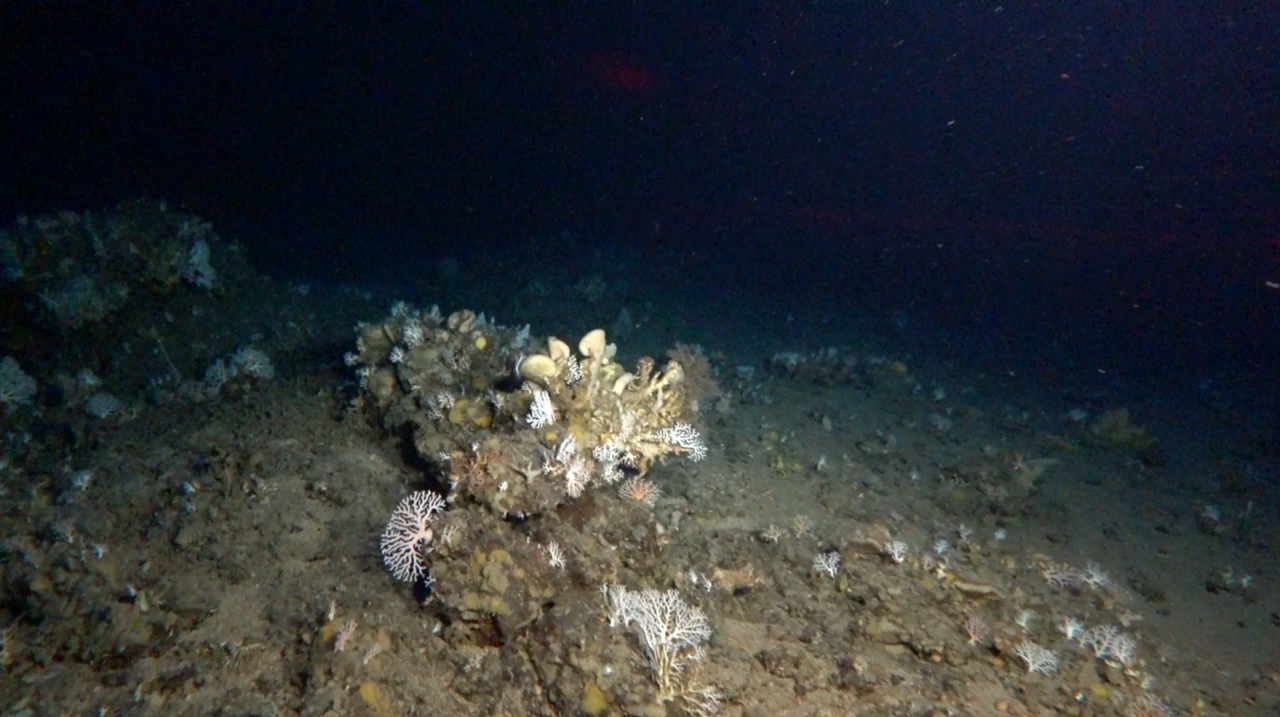 Hard corals (in white/ light pink) probably they are hydrocoralians (so not "real corals"), and everything else are mainly sponges 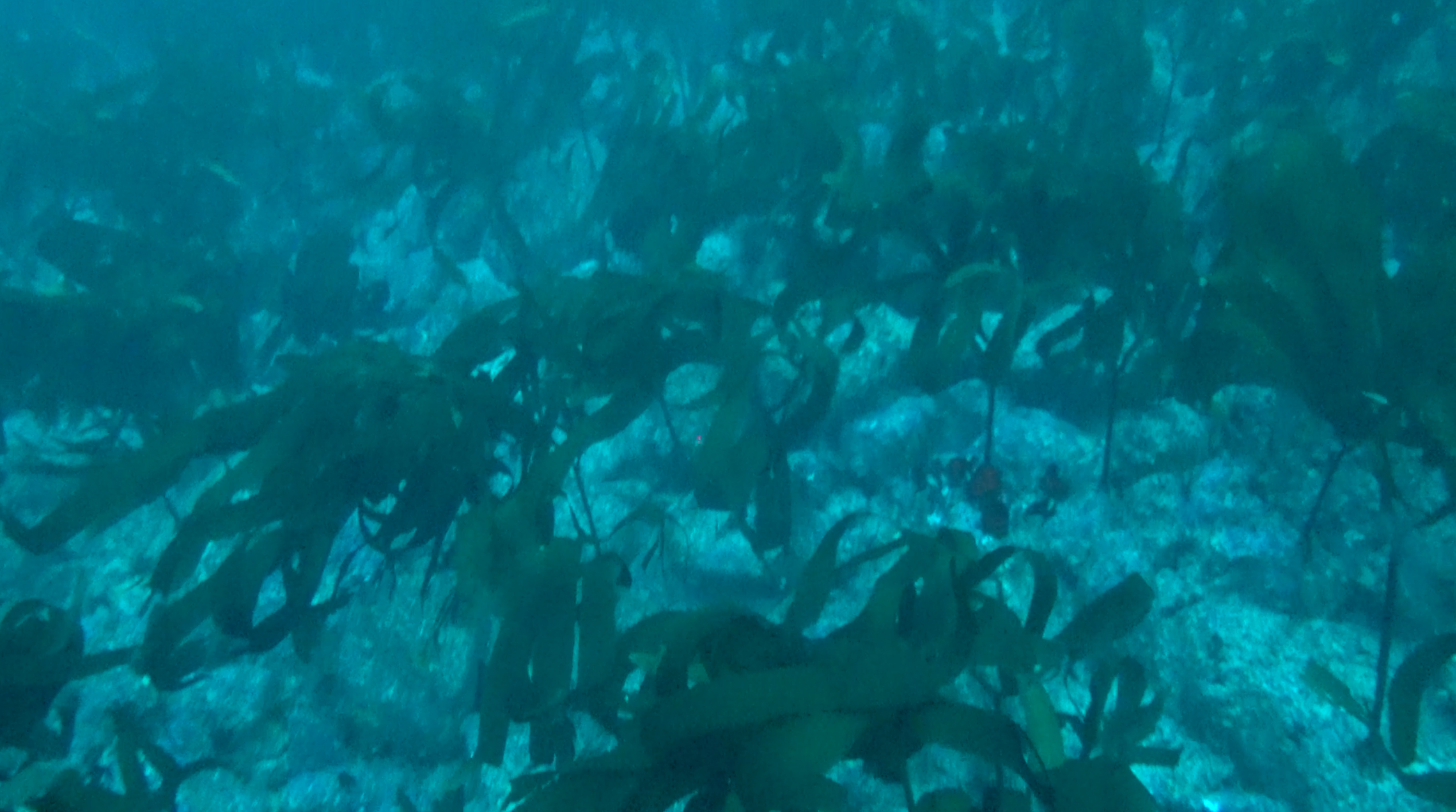 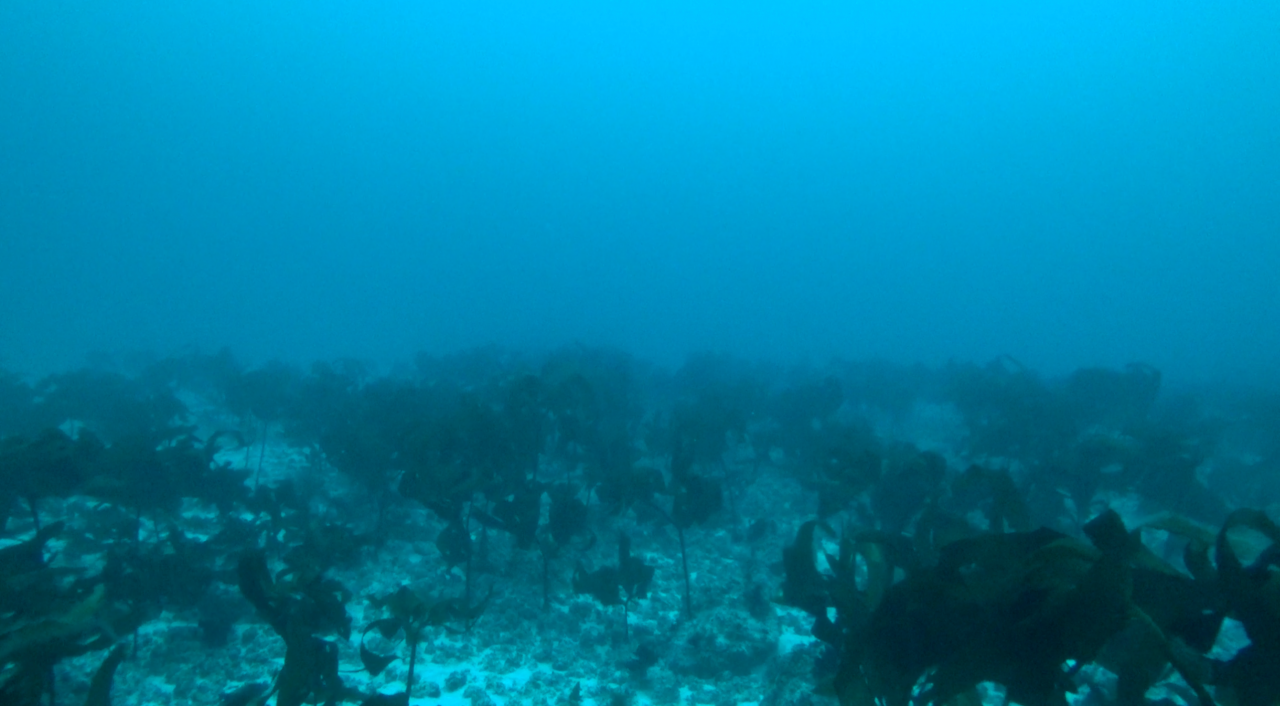 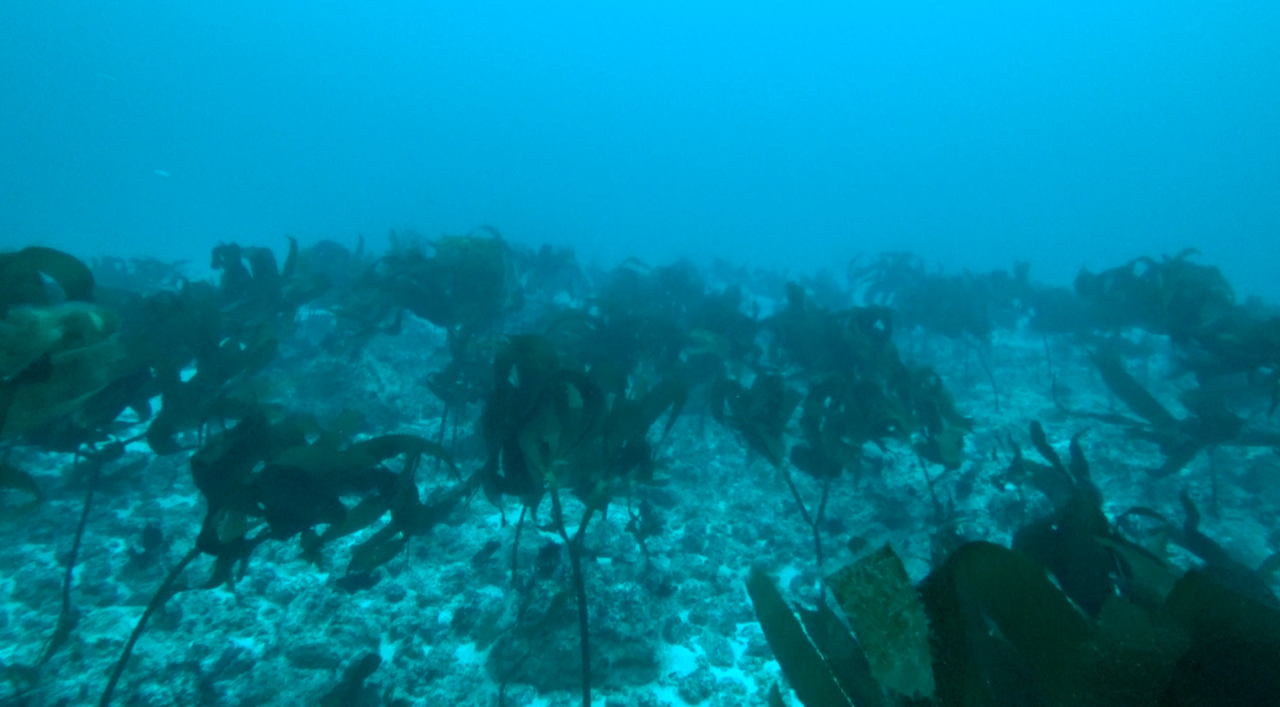 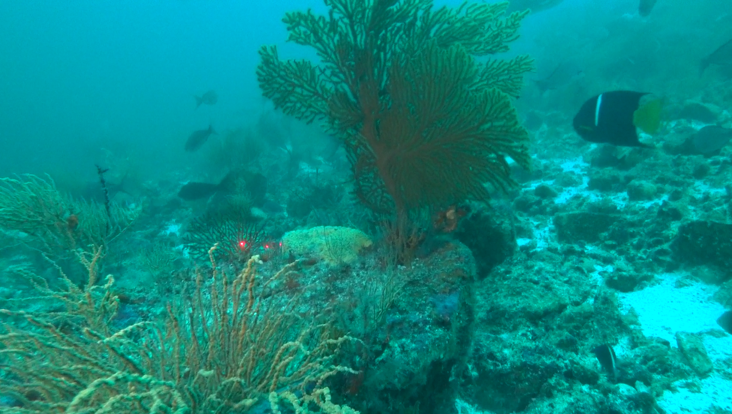