On January 10, 2012 VideoRay LLC of Phoenixville, PA, along with Dutch partner Nautikaris BV of Ijmuiden, Netherlands, completed the site acceptance test of four VideoRay Pro 4 submersible systems with spare parts, accessories, and custom modifications.  Training for operators and repair personnel will be completed during January.

The highly competitive contract was awarded to VideoRay in mid-2011, with a mandatory rapid turnaround.  The specification showed the kind of advanced, innovative, efficient, and well-developed solutions that the Dutch Navy prides itself in fielding. 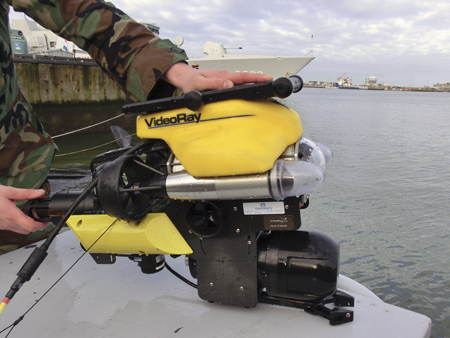 The missions required by the winning system were:

Objects of interest are primarily small objects such as limpet mines, sea mines, ammunition, as well as contraband and drowning victims. These are all areas where VideoRay dominates the market worldwide.  VideoRay has recently won contracts or sold multiple units to the US Coast Guard, US Navy, New York Police Department, Saudi Border Guard, Norwegian Navy, and several other governments and agencies.

A critical advantage was VideoRay’s superior hull crawling system, which was also a critical factor in the decision by the US Coast Guard to standardize on VideoRays for these types of missions.  This goes beyond the first generation of crawlers offered by competitors, who typically add terrestrial powered crawlers to underwater vehicles.  The latest improvements to this advanced crawler were funded with over 2 million US dollars by  the US Department of Defense Combating Terrorism Technical Support Office, which summarized the project in their 2011 Annual Review :

Most aspects of the mini-ROV systems consisted of off-the-shelf components delivered with VideoRay’s Pro 4 Port Security configuration.  However, for this contract Tritech Altimeters, and Desert Star Systems Long Baseline transponders were integrated, along with VideoRay lateral thrusters.  This involved software additions to the VideoRay Cockpit software through the use of its Software Development Kit SDK.  In completing the integration of these accessories, VideoRay’s Protocol Adapter and Multiplexor (PAM) module, which allows several accessories to share the same 485 bus used to control the submersible, played a critical role.

The underwater technical capabilities of the Royal Netherlands Navy are now greatly enhanced with the delivery of Pro 4 systems.   The ROVs complement the capabilities of tools like the Remus 100 AUV from Hydroid, SeeByte SeeTrack, and the Diver Hand Held Multibeam Sonar.  VideoRay will be further enhancing operational effectiveness through development partnerships with equally innovative companies such as SeeByte.

“This was a difficult task given the extremely short timeframe in which we had to deliver custom hardware, software, and physical integration” said Scott Bentley, President of VideoRay. “I’m very proud of our development and production teams, and we could not have done it without Nautikaris.  They are clearly the premier underwater technology company in their area.”

ABOVE IMAGE: The customized VideoRay Pro 4 was fully integrated and delivered with an Altimeter, Long Base-Line Positioning System, Ship Hull Crawler, Multi-Beam Sonar, Fan Lasers, Manipulator, a Lateral Thruster, and Customized Training  along with the standard ROV features that have made the VideoRay the best-selling ROV in the world.  PHOTO COURTESY:  Marcus Kolb, 2012

No training scheduled at this time. Please contact This email address is being protected from spambots. You need JavaScript enabled to view it. for more information