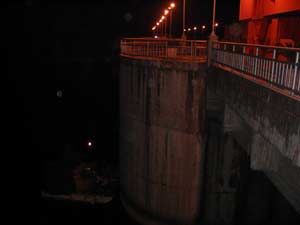 Inspects Trash Racks Faster and More Safely than Divers, and Provides Video Record of Results – VideoRay’s representative in China is Beijing Ocean Seeker, and they have developed a reputation for excellence in underwater inspections in challenging conditions, particularly with hydroelectric power stations. They received a call from a diving company working on the Manwan station a few days before the Chinese New Year.

The Manwan station is located on the Lancang river, 510km from Kunming, the capital of Yunnan province. This is the first such plant on the Lancang; construction occurred between 1986 and 1995. It has a capacity of 1.25 gigawatts, and produces 7.8 billion KWH per year.

The challenge was to determine how badly the trash racks were blocked. If too much material is caught in the racks, the result is lower water flow and reduced power production. There are five arc gates, and each has three bar-type trash racks. The deepest part of the inspection was at 60 meters. The inspection was begun at 2:00AM, and needed to be finished by daybreak.

To do this inspection with divers was extremely difficult due to the conditions – particularly the bitterly cold water. The diving company was hopeful that the VideoRay could do the job more rapidly, and produce good video of the conditions at the trash racks – they did not want to put their divers in the water if it could be avoided.

The VideoRay was launched from a moveable raft, and dove down to the trash racks rapidly. Video and stills were captured on Beijing Ocean Seekers’ mp4 digital capture technology, which clearly showed that the intakes were badly blocked by branches and garbage. “View video here”: The divers were amazed at the speed with which the VideoRay could swim around the trash racks and complete the inspection – just 20 minutes per gate. The entire inspection was completed by 4:30AM.

The videos and still images produced by the VideoRay will be very important for follow-up cleaning and workload evaluation by the divers. VideoRay proved itself incredibly powerful and valuable for this critical power plant.

No training scheduled at this time. Please contact This email address is being protected from spambots. You need JavaScript enabled to view it. for more information